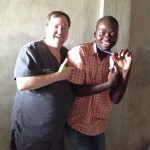 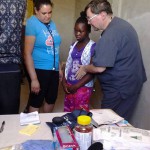 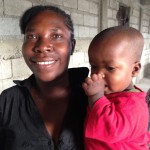 One of the mamas with an orphan 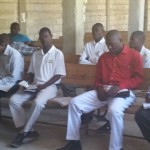 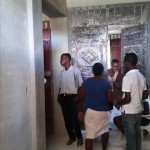 For our last mission trip to Haiti this April, we were privileged to also have Dr.’s and Nurses go with us and had a medical clinic with the orphans in Onaville for the first time. Dr. Mark Salsberry took his first trip with us and has kindly shared his impressions with us on Facebook. Here are his thoughts. We are so grateful for his perspective and help!

As promised here is the first of my observations about life in Onaville, Haiti, and particularly in the New Covenant Foundation Orphanage where we served. It has been said that some live to eat, while other eat to live. The latter would definitely be true of these people. Often there is only one meal a day, sometimes there are two, but some days there are none. Breakfast and or lunch often consists of white spaghetti, cooked in oil with a pungent form of garlic. To this would… be added a few onions and perhaps a sliver of green pepper. The second most common food would be rice with a few beans (and sometimes some dirt and grit) thrown in. It was a hearty whole grain type rice seasoned with some type of curry powder. Also, to either of those dishes would be ample amounts of salt… enough to make our feet swell in even such a hot environment. Fried plantains were also abundant. Most days there was no meat. Occasionally chicken was had, and on one big day everyone had some very fresh goat, butchered right outside the orphanage door! Missing were fruits, vegetables and milk. Because drinkable water is relatively scarce, many times the children are given sugary drinks for hydration and for flavor. The net effect for them is a high carbohydrate, low protein, high salt diet that is sustaining but not optimal for health. I saw several children with signs of Vitamin C deficiency. The lack of fruits and vegetables probably contributed to other vitamin deficiencies as well. As a whole many children and most adults I saw had very poor dentition, lots of cavities and even completely broken teeth. As you can see in the various pictures of the children, they do not appear to be starving to the point of being emaciated. But the unbalanced diet does not provide for optimal health or healing. It was hard to tell if the children actually felt hungry. One thing for sure… if one of them dropped spaghetti on the floor, the others would be quick to pick it up and devour it! Maybe it was the heat, and maybe it was seeing the relatively small portions they had, but I did not feel hungry much myself. (5 pound weight loss in one week not a bad deal!). I would challenge any of us to follow this diet for just 3 days to see what it is like.

Thoughts on our trip to Haiti part 2 –

I have a dual Bachelors degree in Biology and Chemistry. Repeatedly in my training I had heard that “water is the chemical of life.” Here in the States, water is abundant, cheap and relatively clean. We bath, clean and drink all from the same source. Water in Onaville, Haiti is scarce. Generally there is little available for adequate bathing. Nearly all the children I saw had fungal infections in their hair. The majority of the women had chronic bladder and female infections, partly from not being able to cleanse well but also because everyone it seemed is partially dehydrated all the time. Clean drinking water is scarce, is usually only found in bottles and little sealed bags and is expensive. Some of their fluids come from sugary soft drinks, with resultant poor teeth and nutrition. Many of these containers are just tossed to the ground when done and not reused or recycled, leaving trash in many places. The children at the orphanage seem to get water twice a day. Though adapted to such a hot dry environment, many times they would purse their lips and lift their fingers to their mouth mimicking taking a drink. It is very hard to look a child in the eye who asks you for a drink and have to tell them that there is none to offer. There is a cistern at the orphanage to collect rain water but there is currently no way to adequately treat it for consumption. The long term goal is to dig a well, but the water from this will also require treatment for drinking purposes. Water purification equipment is available but is very expensive. We actually stayed in Port Au Prince at night where our team had a more abundant but not unlimited supply of drinking water. Bathing for us consisted of a cold shower… one minute of water to wet with. Then shut off while you soaped and shampooed, then one minute to rinse. The shower water was untreated so it could not be drank. It is so warm there that we sweat all day and never really felt very clean even after the mini showers we were able to take at night. The last night there we were taken to a beach side resort. It never felt so good to just be able to dip in a pool!

Plumbing is very inadequate there. Since there is little water and inadequate piping from most toilets (their standard is 2 inch pipe while US is 4) NO paper products could go into the toilet but had to be placed in an open bucket next to the toilet. Yes, there was smell and flies! From a disease prevention standpoint, much was left to be desired. A lot of the little boys just skipped the toilet altogether and let it go wherever they were, even out on the playing field! Also, they are not a modest people…  most of us had an audience of 4 or 5 kids whenever we went potty…

One thing I failed to mention about the food was it’s preparation. The food is cooked over small charcoal pits inside of tiny blocked wall rooms. The temps in there had to be over 100 degrees. Hats off the to cooks who worked hard to feed the children each day!

(we will be sharing Dr. Mark Salsberry’s impressions in a 3-4 part blog series. We are so grateful for his perspective and sharing it with us.)